The Thick of It series 4 starts shooting this month 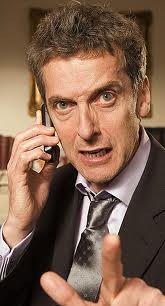 Armando Iannucci’s political satire, The Thick of It, is returning to BBC2 this autumn with seven new episodes…

Having just wrapped HBO’s The Thick of It spin-off, Veep, starring Seinfeld’s Julia Louis-Dreyfus as a fictional US Vice President, Armando Iannucci and crew are shooting the fourth series of the hit BBC political satire this month.

Due to air on BBC2 this autumn, seven new episodes of The Thick of It are about to start filming, with cast regulars Peter Capaldi, Chris Addison and more being joined by new coalition characters.

Series 4 will see the gloriously expletive-happy spin doctor Malcolm Tucker in opposition for the first time, continuing the specials’ focus on the run-up to the PM’s departure.

Read more at Den of Geek
Posted by helygen at 23:55

Labels: BBC2, Peter Capaldi, The Thick of It, TV