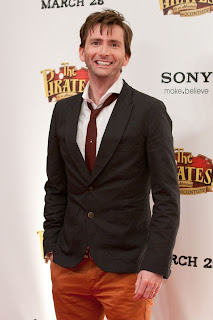 The Pirates! In an Adventure with Scientists

'The Pirates! In an Adventure with Scientists' exclusive video
The Pirates! In an Adventure with Scientists has revealed a new video exclusively through Digital Spy.
The teaser clip sees the cast of Aardman's latest animated movie debate the benefits of being a pirate. Looting and cutlasses are at the heart of the argument, which spills over into violence before Hugh Grant's captain breaks up the scuffle.


Grant recently revealed that he was "a bit nervous" about voicing the Pirate Captain, saying that it took him some time to get the vocal intonations right.
"I thought I was timing the jokes right, but I kept thinking whether the voice was basso enough to go with this great big Pirate Captain," he explained.
"So we worked on that a bit. Then watching the stuff, in a way it's soothing because they're so clever with their animation, so much of the humour is in visual stuff, that the pressure felt slightly off me - it doesn't all completely depend on whether I land the line or not. That was helpful."
The Pirates! In an Adventure with Scientists, featuring Salma Hayek, Martin Freeman and David Tennant, opens on March 28 in the UK and on April 27 in the US under the title The Pirates! Band of Misfits.
Source: Digital Spy

Following the première of The Pirates! In an Adventure with Scientists last week (Wed 21 March), there have been a number of reviews:
Screen Daily
Den of Geek
Skwigly 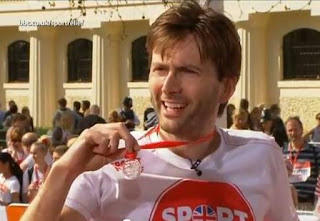 David ran his mile in The Mall in London (near Buckingham Palace) and was interviewed both before and after the race.

We Won’t Drop The Baby
This evening (Sunday 25 March) David Tennant provides the voiceover for the documentary which was originally called Disabled Parents: Are You Having A Laugh? before the name was changed to Jokes, Nappies and Wheelchairs but is now called We Won’t Drop The Baby.


The programme focuses on comedian Laurence Clark and his wife (who are both disabled) as they prepare for the birth of their second child.

It will be broadcast on BBC One as part of BBC's Disability Season.
It will be shown at 10.25pm in England, 10.45pm in Northern Ireland and Scotland and at 11.05pm in Wales.
Source: David Tennant on Twitter