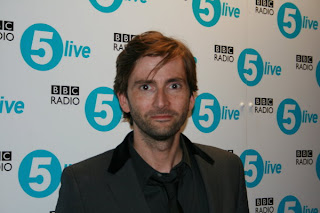 Afternoon Drama - Waiting For The Boatman

Naples is a dangerous place in 1610. Following a violent attack on the street, the renowned painter and hell-raiser Caravaggio has gone missing. Mario Minniti, his former apprentice, arrives in the city to retrace his last known movements, but his search leads to uncompromising discoveries.

The Decoy Bride - review and competition

To celebrate the release of The Decoy Bride, Entertainment Focus has 3 DVD's to give away.
Please note you must be a registered user to enter the competition. If you don't have an account sign-up now.
This competition closes on Friday 30th March 2012 at 11.59pm
More details at Entertainment Focus

Four publicity photos of David Tennant in The Minor Character have been posted online on photographer Chris Lobina's website. The first one is on the front page of the website and the other three are in the publicity photos section (see gallery menu at foot of page).
Source: DavidTennantOnTwitter

Interview: Red Magazine
David Tennant’s interview by Lauren Laverne is published in Red magazine this month.
Click here to see a scan of the interview. It says that True Love will be broadcast in April whereas previously May had been announced.
Source: DavidTennantOnTwitter

More recent news updates can be found here
Posted by ScottishActors at 17:44

Labels: David Tennant, interviews, The Decoy Bride, The Minor Character. drama, The Pirates: In an Adventure with Scientists, True Love, Waiting for the Boatman