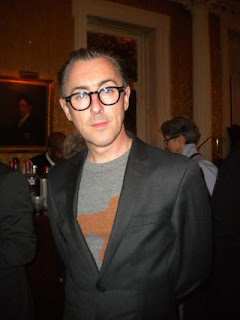 He currently stars as Eli Gold on CBS' The Good Wife, for which he received an Emmy Award nomination, and his toured the country with his cabaret show, I Bought a Blue Car Today, based on the CD of the same name.
For advance tickets, visit www.xlcabaret.com.

The evening was directed by Daisy Prince with musical direction by Chris Fenwick and celebrated the rich history of musicals produced by The Public Theater, including HAIR; A Chorus Line; Caroline, or Change; and Bloody Bloody Andrew Jackson; as well as upcoming musicals such as February House premièring at The Public this May; and the Shakespeare in the Park production of Into the Woods this summer.

Highlights of the evening included Kelli O’Hara singing “What I Did For Love” from the hit musical A Chorus Line; Benjamin Walker singing “Rock Star” from the critically acclaimed Bloody Bloody Andrew Jackson; Norm Lewis and Renee Elise Goldsberry reprising their hit “Night Letter” from Two Gentleman of Verona; Montego Glover singing “Easy to be Hard” from HAIR; and Laura Benanti singing “On the Steps of the Palace” from Into the Woods.

Read more at Broadway World
Posted by ScottishActors at 16:43