Peter Capaldi: 'The Thick Of It' finale

The Thick of It: good news, minister, the show is over
The stars, writers and producers tell the story of the award-winning political satire which made a household name of spin doctor Malcolm Tucker and ends on Saturday 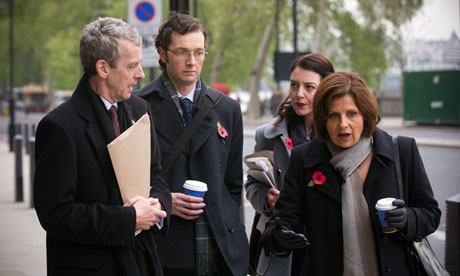 
Award-winning political satire The Thick Of It comes to an end on BBC2 on Saturday. The show, which made foul-mouthed spin doctor Malcolm Tucker a household name first appeared on BBC4 seven years ago. Here we look back on the origins of the show, its big-screen spin-off, and how it became part of the political lexicon.
Armando Iannucci had already made The Day Today and I'm Alan Partridge, with Steve Coogan, when he was inspired to create The Thick Of It after arguing the case for Yes Minister in a 2004 Best British Sitcom poll for BBC2. It was commissioned for an initial three-part run by BBC4.

Armando Iannucci "One of the lucky offshoots [of the BBC2 show] was that I could sit down and watch every episode of Yes Minister and it made me think we need something like this now. The terrain was very different – it was not about the civil service but about advisers and the whole Campbell-Mandelson communications thing. I spoke to [Yes Minister co-creator] Antony Jay and he said 'go for it'."
Adam Tandy (producer) "When Peter Capaldi [who went on to star as Malcolm Tucker] came to the casting session he had already been for an audition that day. I don't think he had been working an awful lot and was in a slightly off-colour mood. We did an improvisation session and he channelled all his frustration into it. That could be what got him the part. He was born to play the role."
Iannucci "I knew within the BBC there was a buzz about it and I felt it myself shooting it. In the very first scene Malcolm Tucker comes in and fires the incumbent minister; Malcolm looks at him and whatever light there was leaves his eyes. I remember looking at the monitors thinking, we've got something here."
Critics said the show could "scarcely be more topical", with Andrew Marr describing it as the "angry, rampaging bastard child of Yes Minister". It was commissioned for another three-part run, but the faux-documentary filming style was not to every viewer's taste.

Chris Addison (special adviser Ollie Reader) "It's calmed down a bit now but if you look back one of the biggest complaints wasn't the swearing but the camerawork. It used to make people feel sick."
Tandy "We shot it in the old Guinness brewery in Park Royal, west London. We were literally the last people to leave before the bulldozers moved in and if you listen to the soundtrack on the second group of three episodes you can hear the lorries."
Days after beating Ricky Gervais to win best TV comedy actor at the British Comedy Awards in 2005, it was revealed star Chris Langham (who played the bumbling minister Hugh Abbot) had been arrested by police as part of an investigation into child pornography on the internet. A planned series was replaced by two specials, with Langham's character absent "in Australia", while the case came to court. He was subsequently jailed in 2007 for downloading images of child abuse and did not return.
Iannucci "We chose not to leap to judgment, something we are still seeing to this day in terms of government by newspaper headline, mob rule and so on, and said we would wait."
Tandy "The hiatus was not great because we lost momentum but we knew the show was good and knew there was still enthusiasm to make it. We managed to keep the show in production even though we were not officially making a series."
The show's writing team, including Jesse Armstrong, Simon Blackwell, Tony Roche and Sean Gray, included Ian Martin in the unusual role of "swearing consultant".
Ian Martin "I hadn't seen a script when the first ones came over and Armando, who I had worked with on a couple of things, said just shit all over them, do whatever you like. I still wasn't sure what he wanted but I remember changing a line, when Malcolm was on the phone, from 'he's fucking useless' to 'he's as useless as a fucking marzipan dildo'. I sent them back and said is this the sort of thing you're after. He said, yeah, yeah, brilliant."
Sean Gray "The first draft of the script will go to Armando and he will feed in notes – 'less shits', 'too fucky' or just 'funnier' written in the margin. It motivates you. It then goes to the other writers. By the time of shooting you are on draft 20 or more."
The Thick of It transferred to the big screen with film spin-off, In The Loop, in 2009, starring James Gandolfini.
Iannucci "I had been thinking about the fallout from the war in Iraq and thought it would make an interesting film. I already had a repertory company in place in terms of people who could do it."
Tandy "We were very lucky BBC Films came to us. We thought about it for about 12 seconds before saying yes. We heard James Gandolfini was a fan so he was very pleased to come on board."

Joanna Scanlan (press chief Terri Coverley) "I know Tony Soprano was in it so it should have felt like a huge deal but whatever Armando does is very grounded, you never have a sense of not being safe or things being out of control. It brought a new audience to the TV show and made a huge character out of Malcolm Tucker."
Addison "On the third day of shooting one of the assistant directors turned to me and said 'is it always this nice on the telly show?' Because it isn't always this nice in film."
When The Thick Of It returned to the small screen in 2009, it switched from BBC4 to BBC2, and Hugh Abbot had been replaced as minister by the hapless Nicola Murray, played by Rebecca Front, who had worked with Iannucci on shows such as The Day Today.

Rebecca Front "I sat down at a writers' meeting with some of the cast members and at that time they had no character, no name, no script. Armando said 'Do you want to start improvising?' It was terrifying – that was the first time I was Tuckered. Peter transformed into Malcolm Tucker, pinned me against the wall and started shouting at me."

Roger Allam (Peter Mannion MP) "My character just emerged really as someone who is behind the new Tory party – although of course we never say it is the Tory party – behind the whole Cameroon thing, get down with the kids and hug a hoodie, all that shite."
Front "I sincerely hope my character doesn't put women going off into politics. I would hope women would want to go into politics because they think they can do better than Nicola Murray. Nicola screws up not because she's a woman but because she's a human being."
Life imitated art when Ed Miliband described George Osborne's latest budget as an "omnishambles". It was a word coined on The Thick Of It by Tucker.
Martin "That was Tony Roche's elegant phrase, it was utterly astonishing. I remember someone sending me a screengrab from Newsnight and there was #omnishambles against the back wall of the studio. It looked like a scene from The Day Today. I suppose it's part of politicians wanting to appropriate the satire, as a way of making it less harmful to them."
Iannucci "When people in real life politics start quoting elements of it to attack opponents, that line between reality and stupidity has been crossed. You kind of think they really ought to be getting on with their own lives. It's not the reason I decided to stop doing it, it's just an interesting point we've arrived at."
This year's fourth series played out against the backdrop of a Leveson-style inquiry. Incidents on the show began to eerily pre-empt similar real-life events, such as a storyline about a government proposal to cut school breakfast clubs, followed the next day by reports of a real-life equivalent. A select committee report this month warned the government against Thick Of It-style special adviser appointments. The public administration select committee warned that the BBC series had "more than a grain of truth".
Gray "We have a consultant [BBC political reporter Kate Conway] who helps us get the more mundane, important details right, like the layout of Ed Miliband's office, but we don't have moles per se. We spend the majority of our time working on jokes and funny lines, not policies."
Front "Every single episode has presaged something that was coming. I sat on a panel with David Cameron the other day and he was forced to acknowledge that, yes, it is basically exactly like what is happening to his government."
A former coalition special adviser "Certainly among the special adviser community it is seen as spookily close to real life. Not quite a fly on the wall documentary but each and every situation that they depict is experienced by special advisers and other people in government on a pretty much daily basis. What it has done so brilliantly is demonstrate that behind the scenes of what might appear an impressive government machine (although not recently) are a bunch of people just like in any other office, with all the clashing egos, fights over territory and pitfalls that go with it."

Labour MP and former culture secretary, Ben Bradshaw "The macho laddish aggression and anger is nothing I ever experienced in government with special advisers or anyone. Tempers frayed very rarely, if at all; maybe I was moving in the wrong circles. That doesn't mean to say that some of the storylines haven't been pretty prescient and prophetic. One of the problems is the reality is much more interesting and extraordinary than the fiction."
Iannucci has said Saturday's episode of The Thick Of It will be the last. He is working on a big-screen adaptation of Alan Partridge and the second series of his West Wing satire Veep, starring Julia Louis-Dreyfus, for HBO.
Iannucci "It's definitely the last series. I've known from past experience to never say never. I don't think it's going to change politics. In terms of comedy hopefully it will inspire someone in the same way that I remember listening to Hitchhiker's Guide to the Galaxy or watching Not the Nine O'Clock News and thinking, I want to do something like that. You end up making something not like that, but it gives you the impetus to set out on that road."
Gray "It's a shame to stop but it also makes sense because hopefully we haven't outstayed our welcome. It's great to leave at a point where people are hopefully wanting more. That's the best way."
Tandy "Has it changed anything? I think it has. It's brought the way politics functions in this country out into the open. Its shows the government needs a bit more transparency, but it also helps you feel for the politicians sometimes. They are just ordinary people trying to do a job."
The Thick Of It, BBC2, Saturday, 9.30pm

Labels: Peter Capaldi, The Thick of It, TV series