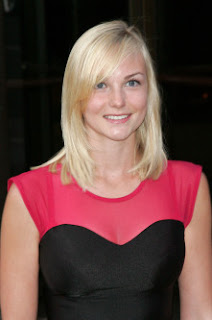 Joanna Vanderham to star in Donmar Trafalgar’s 'The Promise'
Penelope Skinner’s adaptation of The Promise will kick off Donmar Warehouse’s final season of RAD at Trafalgar Studios. Based on the Russian play by Aleksei Arbuzov, The Promise will star Max Bennett as Marat, Gwilym Lee as Leonidik and Joanna Vanderham as Lika. Directed by Alex Simms, the play will run November 15 and through December 8, with an opening night set for November 19.

The Promise takes place in 1943 in war-ravaged Leningrad, and follows three teenagers thrown together by history. In the years following the siege, allegiances shift, love falters and their vow of solidarity is stretched to its limits.

Bennett has appeared on stage in Luise Miller, Relatively Speaking, Posh, Danton’s Death and Mrs. Warren’s Profession. Lee’s stage credits include King Lear, Hamlet, Othello and Oedipus. Vanderham is making her stage début in The Promise and is best known for her TV work in The Paradise, Dancing on the Edge, Young James, Above Suspicion and The Runaway.
Read more at Broadway


Isaacs, best known for playing the villainous Lucius Malfoy in the Harry Potter films, was nominated for his role in the series based on Kate Atkinson's crime mystery novels in which he portrays Jackson Brodie, an Edinburgh-based, tough-but-empathetic private detective with a tragic past.

Vanderham, who was plucked out of the Royal Welsh College of Music and Drama to make her professional debut in "The Runaway," plays a young girl who grows up on the streets of London's sleazy Soho district in the '60s and '70s and has a doomed romance with a childhood sweetheart.
Source: Hosted News