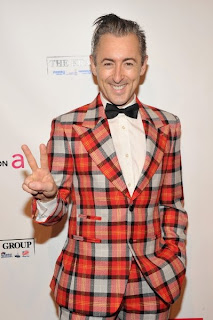 The event will be held at Dixon Place, located at 161A Chrystie Street (between Rivington and Delancy) in New York City on Monday, October 22, 2012.

Doors open at 7 p.m. with the beginning of the silent auction. Items being auctioned off include work from leading photographers and fashion designers. Performances start at 8 p.m. and the livestream of the final Presidential debate begins at 9 p.m.

Scroll through our favorites from the show below, all of which have been filtered through an "app that makes them square and saturates the colors, like a Polaroid," according to Cumming's artist's statement. Three guesses on what that could be!
Source (with slideshow): Huffington Post

“I see things on the street and video them just in case,” he told us at an event for Peter Gabriel’s Witness, a human rights organization that teaches activists how to take footage, at Roseland on Thursday.