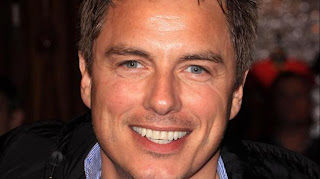 John Barrowman joins cast of Arrow
John Barrowman has joined the cast of Arrow. The Torchwood star will take on a leading role in the CW's new show about superheroes, which will concentrate on the exploits of billionaire Oliver Queen - aka 'The Green Arrow' - who fights crime with his archery skills.

According to Entertainment Weekly, John will play a ''well-dressed man who is as mysterious as he is wealthy ... he is an acquaintance of the queen family and a prominent figure in Starling City''. His character has not been named and insiders claim the 45-year-old star could be set to take on the role of deranged Stanley Dover, who is obsessed with black magic.

John's casting comes after he shot the pilot for another US TV series, Gilded Lilys - which is being billed as America's answer to Downton Abbey. He plays Julius Ashford Lily in in the period drama, which has been commissioned by ABC. It tells the story of the first luxury hotel built in New York in 1895 and John's character is described as the ''favourite son and golden boy'' of the Lily family, whose financial and social fortunes are undermined by a scandal. Gwyneth Paltrow's actress mother Blythe Danner has also been cast in the show, as has 'Mildred Pierce' actor Brian O'Byrne.
Source: STV
Originally reported by Entertainment Weekly
Also reported by Reality TV World and BBC America and many many others!

The concert features classic numbers including: Singin in the Rain; You Were Meant For Me; Almost Like Being in Love; I Could Write A Book; Make 'Em Laugh; Get Happy; For Me and My Gal; I Got Rhythm; Good Morning and Broadway Melody.
Source: Musical Theatre News

John Barrowman to visit Waterstones in Glasgow
On September 14 at 6pm, Torchwood and musical star John Barrowman and his sister, Carole E Barrowman, will make a return visit, after an extremely popular event earlier this year.

They’ve co-written a new book, Torchwood: Exodus Code, which they’ll be signing copies of – the follow-up to Hollow Earth which is already available in the UK. Again, staff expect the event to be popular – so the advice is to arrive early.
Read more at STV


Torchwood: The Exodus Code audiobook
Regulars will already know about Torchwood: The Exodus Code novel by John Barrowman and his sister Carole – but did you know that there is also an audiobook version from AudioGO? Scheduled for release on 13th September, Torchwood: The Exodus Code currently has no reader confirmed (Eve Myles or John Barrowman would seem most likely for a big original title like this), so we can only assume that they’re busily recording and putting the results through post-production right now! You can get your copy of the 7 CD audiobook – lasting around 9 hours – for an RRP of £15.99, or head to Amazon where the story can be pre-ordered for just £13.68.
Read more at Kasterborous

The interview was done at Comic-Con and released a few weeks ago, but Martin thought it was noteworthy enough to write about recently on his blog to share it with his fans.

In the video, Martin talks about his first Comic-Con and his favourite comics, and they discuss being fans while being unable to walk around the convention without being mobbed. They also go over some of the things we’ve heard before, like how Martin was originally inspired by turtles and why Tyrion is his favourite character. On season 3, Martin won’t give anything away but does warn book fans that there are changes coming: “I kill a lot of characters, [the showrunners] kill even more.” Well, that’s just terrifying, right guys?! The interview was done with G4.