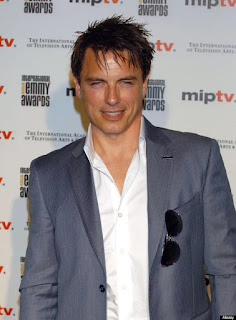 John Barrowman: There’s more to actor than swashbuckling Torchwood character
When Fan Expo Canada hits the Metro Convention Centre from Aug. 23 to 26, there will be thousands of eager followers of Doctor Who and Torchwood there to see John Barrowman, the omnisexual Captain Jack from those two series, in the flesh — if you’ll pardon the expression.
But there might be another group as well, smaller, but no less fanatical. That would be the musical theatre fans for whom Barrowman is an idol, albeit one who has never appeared, alas, in the Toronto area.

What kind of a man can combine sci-fi and show tunes? Meet John Barrowman, the 45-year-old Scottish-American for whom Anything Goes isn’t just the title of his autobiography and one of his biggest theatrical hits but a motto that he lives his life by.

“Don’t be ashamed if who you are, don’t play into clichés,” is the advice Barrowman dispenses over the phone from England, splashing in his swimming pool as he does so.
“I’ve never been ashamed of being gay, although it hasn’t always been easy,” says the unapologetic Barrowman. “My family talked about everything, sex was not a taboo subject when I was growing up and I had the best possible mixture of influences: I had an European upbringing in the United States.”

Born in Glasgow, Scotland, in 1967, Barrowman “grew up right in the heartland of conservative America” when his father was transferred to the Caterpillar factory in Joliet, Ill., in 1976. “But I did musicals all during high school and spent the summer shovelling coal in a power plant.”
Barrowman moved to San Diego to study theatre and then went on an exchange program to England in 1989, where he instantly hit it big, playing the juvenile lead in Anything Goes in the West End opposite Elaine Paige at the age of 22.

“And that was it,” he laughs. “I don’t think I’ve stopped working ever since.”

He’s not kidding. If you went to see any of the big musicals in London during the 1990s, you probably saw Barrowman, who managed to star in most of them: The Phantom of the Opera, Miss Saigon, Sunset Boulevard, Beauty and the Beast — you name it. But by the end of that decade he was getting a little restless and he broke out in a variety of directions.

He still speaks with passion of his performance in an obscure 1998 musical called The Fix, directed by Sam Mendes and produced by Cameron Mackintosh, that landed him an Olivier Award nomination.

“That was a trip. I played a heroin addict who was wheelchair-bound. Sam was always after me to go further, try something different. I learned from my research that after a while addicts have to find new places to shoot.
“So at one performance, instead of injecting into my arm, I pulled my underpants right down, shoved my tackle to one side and injected into my crotch.”

Barrowman roars with laughter at the memory.

“Cameron came backstage afterwards and said, ‘Well, you’re never doing that again. Half the audience fainted. Whether it was from the injection or seeing your equipment, I’m not sure, but I’m not taking any chances.’”

He doesn’t think it was directly linked to that experience, but Barrowman went to America for a few years after that, appearing in TV series like Titans, losing the lead in Will & Grace to Eric McCormack, and starring on Broadway opposite Carol Burnett in Putting it Together.

He also played the lead role of Bobby in the 2002 Kennedy Center production of Stephen Sondheim’s Company, a performance about which I wrote at the time that, “His voice hits every note of the Sondheim score with an aching purity that says more about his yearnings than anything in the script, while his puppy-dog playfulness is a tool that keeps deeper intimacy at bay.”

Barrowman now admits that was “a life-changing moment for me. It thrust me into adulthood. I was in my 30s at the time, but acting like a kid. After that, I learned to commit fully in everything I did.”

It’s a good thing he did, because his biggest break was to come along a few years later, a role for which his total commitment was necessary.

When the legendary series Doctor Who was brought back to the BBC in 2005, “I got word there was going to be a swashbuckling character that the creative team thought I’d be great for.”
The role was Captain Jack Harkness, a time traveller from the 51st century who was indeed dashing and larger than life, but also sexually omnivorous and not ashamed of any of it.

“No wonder they thought of me,” jokes Barrowman, but he goes on to describe how nervous he was the night that Russell T Davies and Phil Collinson (the head writer and series producer of the new Doctor Who) came to see him in a revival of his first London hit, Anything Goes.
“I think they came to see the show to discover if I was still hot as I was when the pair of them were thinking of casting me in Queer as Folk,” says Barrowman.

They obviously did, because an hour after the performance ended he received word that he was Captain Jack.

When the character proved incredibly popular, he was spun off in 2006 into a series of his own, called Torchwood, but Barrowman later found out that was the intention all along.

“Russell thought of Captain Jack and Torchwood first, but the BBC said they wanted him to redo and rewrite Doctor Who before going on to the other series. Just to cover his bets, he put Captain Jack into Doctor Who early on and it all worked out like he hoped it would. Clever lad, that Russell.”

Barrowman also attributes a lot of Captain Jack’s impact to the work that writer Steven Moffat did in scripting the initial Doctor Who episodes where the character appeared.

“He was exceptional at taking the personality of the actor playing the role and weaving it into the part. I hate the word ‘character,’ because I believe that on a TV series you become the person you’re playing and vice versa.

After four series of programs, Torchwood went into hiatus, largely, claims Barrowman “because Russell’s partner is not well,” but there remains considerable pressure to resume production.
“You have to understand that it’s not just Russell’s decision or the stars’ decision. It’s a BBC decision as well. The fans want it to come back and I want to come back. I love what it stands for.

“If I were a young boy, aged 10 to 18 and I had a guy on television who I knew was openly gay, playing the hero, it would have made my life a lot easier.”

Early in Barrowman’s career, he relates how a famous closeted producer “once told me never to let people know I was gay and I said, ‘I can’t believe you of all people could tell me this.’
“If I wanted to give a young gay performer any advice today, it would be this: if somebody tells you that you shouldn’t be getting a role because you’re gay, tell them that they’re wrong and then prove them wrong.”

FIVE FAVE CAREER GOALS
Hollow Earth
“It’s a book my sister and I wrote and I’d love to bring it to movie or TV screens.”
True Blood
“I would love to be on one of those wonderfully edgy cable TV series like True Blood or The Walking Dead.”
Tonight’s the Night
“I’d like to do a North American version of this British TV series of mine, where people’s performance dreams come true.”
Mack and Mabel
“Jerry Herman’s score for this musical is stunning, but I’d love to rewrite the book, especially the ending, and produce it again.”
La Cage aux Folles
“I adored playing Zaza and would love to do it again. You want to talk saucy? Just let me go in that one!”

Millport residents arose this morning to a new world; one filled with the promise of cold hard cash or ‘Balamory bucks’ as news that Scots-born John Barrowman had secured funding for a television series based on his and his sister Carole’s young adult novel series Hollow Earth.
Millport which The Sun is duty bound to call ‘sleepy’ is in Cumbrae, off Ayrshire, and was the inspiration for the fictional telepaths John and Carole Matt and Em’s own location, Auchinmurn. 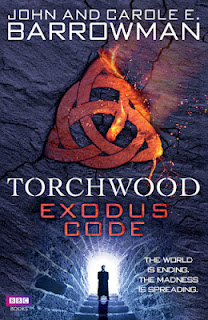 Is there no end to John Barrowman’s talents? New from BBC Books in September is Torchwood: Exodus Code, a new tale from the Captain Jack Harkness actor and his sister, Carole E Barrowman.

In typical Torchwood apocalypse style, it starts with a series of unexplained events.  Earth tremors across the globe.  Women being driven insane by their heightened and scrambled senses.  And the world is starting to notice – the number one Twitter trend is #realfemmefatales.

Typically, governments and scientists are bewildered and silent, and once again the world needs Torchwood, but there’s not much of Torchwood left.