New poster and trailer from 'The Good Heart' with Brian Cox 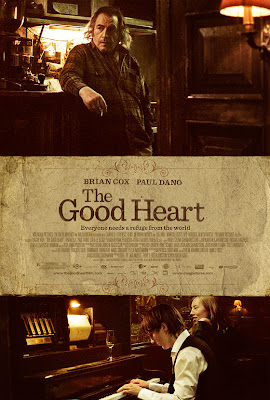 The Good Heart stars Scottish actor Brian Cox as a bartender who takes a young homeless man (Paul Dano) in under his wing:

'Heart' tells the story of Lucas (Dano), who attempts suicide and meets bar-owner Jacques (Cox) while in the hospital. The two quickly form a friendship and Lucas starts to work in Jacques' bar. Jacques plans to have Lucas continue his position as manager of the dive bar but his intentions may be thwarted when Lucas takes up a love interest. The film apparently takes a "dramedy" slant, as Kári, commenting in the film's presskit, seeks to "mix humor with poetry and comedy with tragedy."

"The Good Heart" is a reunion of sorts for the lead actors. Dano's breakout role was in the 2001 feature, "L.I.E." which centered on a 15-year-old Long Island boy who loses everything, including his family and soon becomes involved in a relationship with a much older man (Cox). It's a creepy, but involving film that you should see if you haven't. [The Playlist]

Magnolia Pictures will release the film on Video-On-Demand on April 2 and in theaters on April 30 in the US.

The Good Heart trailer from zik zak on Vimeo.