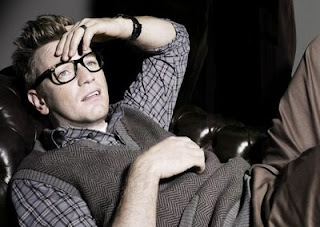 Ewan did an interview with The Scotsman to promote I Love You Phillip Morris which opens in the UK this Wednesday. It was first published on Saturday, March 13 and and you can read an excerpt below and go to The Scotsman for the full interview.

"I'd like to be Philip Seymour Hoffman's boyfriend. I think we'd make a good couple."
If the rule in Hollywood is that the closet doors must stay resolutely closed, then Ewan McGregor has just thrown them open to the soundtrack of I Am What I Am with a rustle of pink taffeta and a whiff of Dolce & Gabbana. He's not coming out, though. Of course he's not. McGregor's not gay; he's been married – to French production designer Eve Mavrakis – for nearly 15 years and they have three daughters (Clara, 14, Esther, eight, and Jamiyan, seven, who the couple adopted from Mongolia). But that's not what we're interested in here. Today, it's all about the boys. And, as it happens, if McGregor had to choose a "bf", Mr Hoffman would be the lucky fella.

"We'd look good, we'd look slightly odd and we'd go to interesting parties and people would be interested in us," says McGregor, clearly warming to his theme. "I don't know him, but I'd like to be his boyfriend."

Shooting on Knockout is expected to go on through Thursday in Los Alamos, New Mexico. There is no word on whether Ewan McGregor will be in New Mexico for the shoot, but here's the filming schedule:

Location – Based camp at West Road between the Ice rink and Camp May Road. Filming at State Road 4 near American Springs Road/Dome Road. West Road open to traffic. Intermittent traffic control at SR 4.