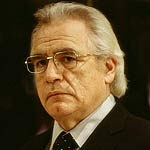 Scottish actor Brian Cox and Vanessa Redgrave have been cast in Coriolanus. They both also starred in The Day of the Triffids in December. The film is an update of the Shakespearean historical tragedy. Shooting is set to begin next week in Belgrade, Serbia.

...[Ralph] Fiennes plays revered Roman general Coriolanus who is at odds with the city of Rome and his fellow citizens.

Pushed by his controlling mother (Redgrave) to enter the Senate, he is loath to ingratiate himself with the masses whose votes he needs to secure a Senate seat. When the public refuses to support him, Coriolanus' anger prompts a riot, which culminates in his expulsion from Rome. The banished hero then allies with his sworn enemy (Butler) to take his revenge on the city.

Billed as mixing the classical and the contemporary, the movie aims to retain Shakespeare's language, but combining it with modern technology and a contemporary environment. [THR]