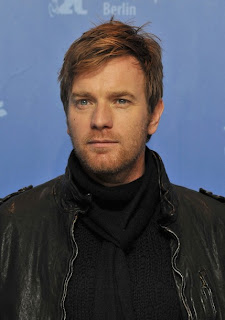 Ewan has been busy promoting The Ghost in the UK and did an interview with the Birmingham Mail (via Sweet on Sigma Films). He also talked about working with his uncle Denis Lawson on The Last Word and maybe working on The Great Pretender with fellow Scottish actor Peter Capaldi.

On working with his uncle:

Since completing The Ghost, Ewan has been able to fulfil an ambition to work with his uncle Denis Lawson, whose exploits in the original Star Wars movies inspired his young nephew back in Crieff, Scotland.

“I love him to death and he is the only person I ever turn to if I need to speak about work.

“I went to start work on The Last Word with David Mackenzie, who I made Young Adam with. I play a chef and there was a nice relationship with the owner of the restaurant. I could just see me and my uncle in those parts together. I suggested it as many times as I felt was polite because it had to be David’s decision.

“It was just lovely to be on set with him and playing two Scottish characters in Scotland.” [Alison Jones]

There hasn't been much news on The Great Pretender in nearly two years, but evidently Peter Capaldi is still trying to get the project off the ground. The film is set in 1938 and back in 2008 IMDb listed the plot as being about two producers who "hire Hollywood star Leslie Grangely (McGregor) to play Bonnie Prince Charlie (also McGregor) in a movie about the 18th century Jacobite Rebellion in Scotland. Soon afterward, a drunk Grangely disappears and the producers are forced to find a replacement. They trick a lookalike extra into playing the role of Bonnie Prince Charlie, "The Great Pretender." It looks like the film is still in development:

He is also hoping to work for another fellow countryman, Peter Capaldi, on The Great Pretender, which would present him with a formidable challenge as he would be called on to play four roles.

However, the pet project written by the In The Loop star has unfortunately been caught up in a legal tangle over rights.

“It is a funny situation to be in when it is your creation, to be stuck,” says Ewan. “I told Peter ‘I may be too old for this in a minute. Hurry up’. But he has reassured me we should be all right.” [Alison Jones ]

Also as a reminder: The Men Who Stare at Goats, which also stars Ewan debuts on Blu-ray and DVD today in the UK.