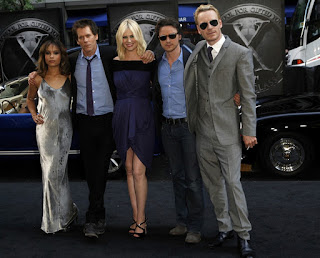 Fans of genetically enhanced beings should rejoice: Fox is confirming the sequels to two highly successful Fox-released movies, "X-Men: First Class" and "Rise of the Planet of the Apes."

Speaking to Comingsoon.net at the Gotham Independent Film Awards, Tom Rothman (co-chairman and chief executive of Fox Filmed Entertainment) revealed that the studio were keen to bring back directors Matthew Vaughn and Rupert Wyatt to continue work on their respective franchises," reported Total Film on the future plans of Fox Filmed entertainment regarding the two franchises.

Rothman exclaimed that both movies had excellent scripts and they are doing their best to ensure that the forthcoming scripts will be even greater. The statement given by Rothman is well-supported by James McAvoy, who played Charles Xavier. McAvoy believes that the character of Xavier should be built more, in relation to the recent loss of his locomotive state.

"It's kind of defined at the end of the film that he's [Erik Lehnsherr] a bad guy. I can't really speak for him, but I know that with Charles, you either have to write him out of the movie or give him an interesting story. He's lost his best friend, essentially, and he's just been paralyzed from the waist down, which is just a huge, huge blow to his considerable ego. So he's got to deal with that," said James McAvoy when asked about the role of Michael Fassbender, in an interview reported by Total Film.

McAvoy is talking to Matthew Vaughn, the director of "X-Men: Origins" regarding his role, but he refuse to disclose any details that may or may not be part of the oncoming sequel.

Also reported by Contact Music
Posted by helygen at 21:36