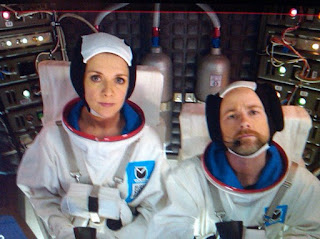 It has been quite some time now since it was announced that the Armen Evrensel science fiction comedy movie Space Milkshake was set to be made. Now it seems that they are making quite some positive progress, with filming underway. Thankfully, there have been a number of pictures released from the set of Space Milkshake, from building the set to the stars involved.

Space Milkshake centres around a group of space workers who are on a rundown orbital sanitation station, when they come into some trouble after salvaging a peculiar device from the wreckage of the space ship. As well as directing Space Milkshake, Armen Evrensel also wrote the screenplay for the movie, which has developed quite some interest among fans.

Space Milkshake stars former Smallville actress Kristin Kreuk, Lord Of The Rings actor Billy Boyd and Stargate actress Amanda Tapping. All three of the movies stars can be seen in the pictures that have been released. It is expected that Space Milkshake will be aiming to be released sometime next year.

Read (and see) more at FansShare
Posted by helygen at 21:32