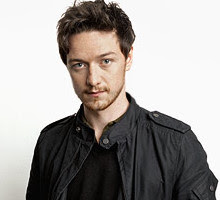 The Scots actor is the first choice of author Denise Mina, whose forthcoming novel is based on the politician. James McAvoy has made a name for himself as an action hero in Wanted and X-Men First Class, but it’s his roots in British drama Shameless that could see him playing disgraced politician Tommy Sheridan.

The actor is the first choice of author Denise Mina, who is in the middle of discussing film rights ahead of the release of her new novel based on the turbulent life of the Solidarity leader.

Speaking to STV’s Grant Lauchlan, McAvoy originally laughed at the thought before admitting that “quite possibly” it could work.

“Quite possibly, quite possibly,” he said. “You think to yourself: ‘Aw, I don’t think that would make a good movie’. I’ll be honest with you, that’s what I’m thinking right now. But, sometimes it’s the oddest things in life that make the best stories.

Read more at STV Entertainment
Posted by helygen at 21:13