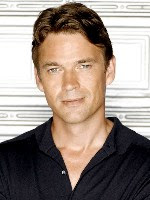 Dougray Scott and other celebrities including Joely Richardson and Ralph Fiennes, have reportedly joined a campaign to save a 1930s art deco cinema in London.

...[they] added their voices to the hundreds of Hammersmith residents who are fighting the council's proposed redevelopment of the town hall in King Street.

The Cineworld cinema and a nearby housing complex for people with sight loss would be demolished.

...Fiennes said the cinema should be preserved for future generations and Scott described the loss of low-cost housing as “scandalous”. [Mira Bar-Hillel]