Entertainment Weekly has revealed it's 20 summer movies they can't wait to see and Angels and Demons is number 3: 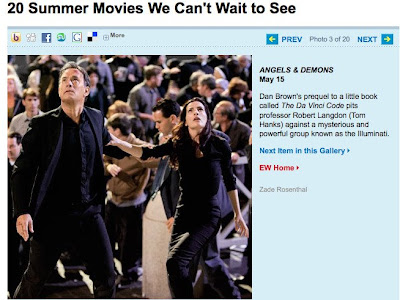 EW also has a profile of the upcoming The Ugly Truth out July 17: 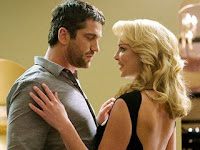 How's this for a pitch? ''There's a lot of, shall I say, flagrant banging and swearing and climaxing and squealing,'' Luketic says of his new film, in which sparks fly between a priggish Sacramento morning-news-show  producer (Heigl) and the boorish shock jock (Butler) brought in to boost ratings. Luketic (Legally Blonde, 21) jumped aboard when Sony Pictures co-chairman Amy Pascal told him the studio had landed Heigl for the   female lead. ''I had just seen Knocked Up and thought she was a breath of fresh air,'' he says. ''You're always looking for that It Girl, and she seemed to have all the elements, with a new spin.''

For the likable brute, producers kept pushing Butler. ''I was skeptical,'' the director admits. ''The guy from 300? In a comedy with Katherine Heigl?'' So the two men went out for dinner, and Luketic says he was sold before they'd even placed their order. ''I was telling jokes and long, politically incorrect   stories,'' says Butler, who'd passed on several romantic comedies because he found them too soft. ''When I saw the script, I was like, 'Okay, this is me.' ''

Heigl wrapped production on Grey's Anatomy last spring only two days before filming began, so her rehearsal process consisted of a night of drinks with Luketic and Butler at the actress' house in L.A. How was the chemistry? ''Three alpha, outrageous people,'' Butler says.