Ewan McGregor and the Electric Slide 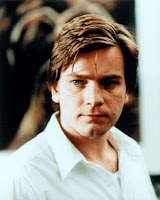 Weirdest title ever. Ewan McGregor and Sundance sensation Carey Mulligan are in talks to star in the movie The Electric Slide. Based on a true story, the movie centers around the life of furniture salesman Eddie Dodson, a man who became a notorious bank robber. Dodson owned a furniture boutique in Hollywood during the 1980s and tried robbing a bank to impress his new girlfriend. Dodson robbed over 70 banks in Los Angeles. before he was arrested by the FBI. Ewan might play Dodson with Carey Mulligan playing his love interest in the movie. Indie production and finance banner Myriad Pictures is putting the financing together for the project and is preselling to buyers in Berlin.

It sounds like an interesting story actually. How on earth did a guy get away with robbing that many banks?