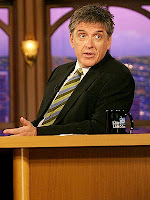 Craig Ferguson, Ellen DeGeneres, and Jay Leno are among the talk show hosts who have decided to support hard-hit local food banks. Craig Ferguson is asking members of his audience to donate canned food to help re-stock the L.A. Food Bank and other charities across America that are being hit by the recession. The L.A. Food Bank now has a 41% increase in demand for food. The goal of the new Yes We Can campaign is to get 12,000 cans a week until April of this year.

Ferguson joked, "I was ecstatic, as we often encourage audience members to leave all heavy, metal objects outside the stage." In the tradition of lounge comedy, he added, "audience members are still free to bring fresh food in to express their distaste for the comedy."

Craig will also appear in public service announcements that ask audiences who don't live in L.A. to donate food to local food banks with the Feeding America charity.